Brown Swiss is a milky-pointed dual-purpose breed. In addition to the milk production and the udder special emphasis on the adaptability, durability and its solid foundation of the animals in the breeding. The suitability of the Brown Swiss for marginal areas of milk production as mountainous areas, extreme climate and forage conditions or the tropics and the favorable composition of his cheesemaking grade milk protein found in breeding consideration.

The ideal adult Brown Swiss cow is 142-155 cm (hip height) in size, more than 600 kg, they are due to different local conditions, depending on the attitude of intensity at least 8,000 to 9,000 kg of milk per year with at least 7- 8% total ingredients of fat/protein. The total amount of protein has to exceed 250 – 300 kg. Farming at most deprived locations, lower production rates will also be accepted.

Calving interval should not exceed 400 days. 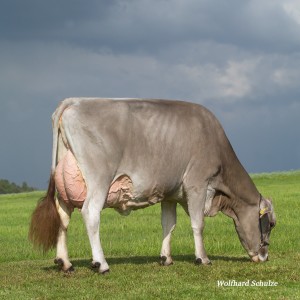 History of the Brown Swiss breed

The roots of the Brown Swiss breed date back to the so-called “bos brachyceros”, the Shorthorn, which originated in the Caucasus and the Middle East and was crossed in Europe probably with the wild “Ur”. In the Alpine region developed out of this as “Torfrind” designated ancestors over the centuries different country beats of the Brown Swiss breed, of which the Allgäu impact, the so-called “Allgäuer Dachs” early in the 19th century was the smallest and most graceful indeed, but by the highest milk yield his sufficiency, health, fertility and longevity distinguished. The Allgäu impact was increasingly displaced by other Braunvieh breeds from Austria and Switzerland by lack of own offspring due to strong livestock sales, losses from cattle pest and forage competition for propagating dairy and eventually went by the strong import Swiss breeding animals for lack of own bulls in its type entirely lost. 1893 Brown Swiss was mainly determined by swiss Taurus lines and only to a small extent by the Tyrol and Vorarlberg breed from which finally again cultivated a distinctive, powerful breed.

With regard to changing economic conditions in 1966 the German Brown Swiss breed started a targeted re-breeding by using Brown Swiss bulls from North America towards a higher, more milk yield dual-purpose breed, without changing the beef production. But the main topic always were aspects of performance, and profitability. The consistent, own breeding work and the simultaneous, targeted out for the internationally best Brown Swiss bulls have made the German Brown Swiss today a globally recognized, leading in the international Brown Swiss breed and coveted breed product which is especially due to its unmatched adaptability and longevity with high performance has proved in all climatic zones of the world. (From: ASR)

A Total amount of  3.718  breeding animals could be exported. The main buyers were Algeria, Belgium, Italy, Russia, Turkey, Tunisia, Uzbekistan an Hungary.

The sperm production for the domestic and international market is strengthened at three artificial insemination centers in Baden-Württemberg and Bavaria.

The exporting company GGI-SPERMEX represents these stations in the international market of cattle genetics.

In 2018 140.883 first artificial inseminations were performed in the Brown Swiss breed in the southwest.

The German Brown Swiss is located mainly in the southwest of the federal territory in the rugged mountainous and Alpine region and in the grassland and forage pre alpine area.

In 2018, 130.418 herdbook cows are counted in herdbook farms in Germany. This is the active breeding population. The consequent, exact selection as well as the application of modern breeding programs guarantee the maximum genetic progress. 152.375 milk yield tested cows have an average milk yield of 7.665 kg, 4,22 % fat und 324 kg fat per year . The protein was 3,61 %  with 277 kg protein per year.